A friend of the blog has alerted us that Mayor Rahm Emanuel held a press conference at the Illinois Center for Broadcasting today, just across the street from Jones College Prep in the South Loop. 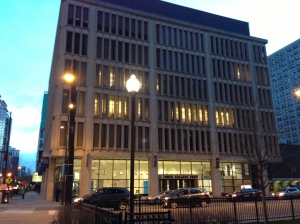 During his appearance, he announced that the current school building will not be repurposed as many in the area (including 2nd Ward Alderman Bob Fioretti) had hoped. Instead, the building at 606 South State Street will continue to be part of the JCP campus when the new building next door opens this fall.

This will nearly double the student population that Jones can serve (from 900 today to 1700 within a few years), which is good news for those students and families who are lucky enough to be admitted to the well-regarded secondary school. For those families hoping the old building might become a less restrictive school serving the South Loop and surrounding neighborhoods, Emanuel’s announcement comes as a major disappointment.

The Sun-Times has since confirmed this news in an article on their website.

Meanwhile, construction continues on the new Jones College Prep building, located at the south end of the same block as the existing facility. Rumors have floated around that it may be somewhat delayed, but there has been no concrete news to date to suggest that the school will fail to meet its projected Fall 2013 opening date. The building’s multi-hued exterior is coming along quite nicely, and work appears to have shifted indoors somewhat as temperatures have dropped recently.